The Russian and East European Studies Program (REES) serves Lafayette undergraduates, alumni, and the interested public by inspiring engagement with and learning about the histories, cultures, and societies of people living in Russia and Eastern Europe. 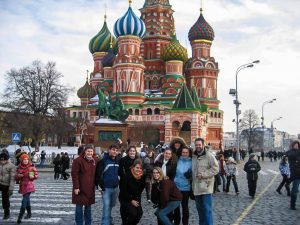 The Russian and East European studies major prepares students to engage meaningfully with one of the most important areas in the world. Majors learn about the history, culture, and present-day circumstances of life in the Russian Federation and a wide number of other states in the Balkans, the Caucasus region, Central Asia, and the European Union. Undergraduates have the opportunity to read Tolstoy (both in translation and in the original Russian), to study an empire that covered a sixth of the globe, to see the other side of the Cold War, and to discuss current issues of human rights and state practices in a volatile and dynamic geopolitical space. Upon graduation, REES majors find that many institutions in the public and private sectors alike have a pressing need for well-trained college graduates with a deep knowledge of the region and a proficiency in one or more of the area’s languages.

The REES major is emphatically interdisciplinary. Students are required to take courses in language, literature, history, and government and are encouraged to take courses on the region in other departments, such as art and religious studies, as they are offered. Majors are strongly advised to participate in a study-abroad program in the region.

Requirements for the major include: one introductory course (REES 241); one theory/methods course in a contributing department (HIST 206, REL 240, or GOVT 309); one capstone (HIST 354, REES 460, or REES 495/496); and six additional courses from an approved list, of which at least two must be in humanities and two in social sciences. Students must also complete RUSS 112 or pass a proficiency test at an intermediate level in Russian or another East European language.  REES majors are strongly urged to participate in a study-abroad program in Russia or Eastern Europe during a summer, semester, or yearlong program as part of their studies.

The requirements for the minor include five courses from an approved list, of which at least two must be in humanities and two in social sciences.